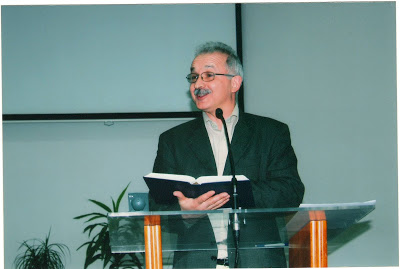 My name is Viorel Gaga, and I was born on January 15th 1961 in Arad, Romania. At the age of nineteen, I received Jesus Christ into my life as Lord and Savior. After high school I attended University and graduated with a degree in Chemistry. It was here that I met my future wife, Daniela, who was a student at the Economics University.

During our student years in Iasi we both were part of a Bible study and prayer group. We were married in 1986 and moved to Targu Mures.

For twelve years I was in charge of the youth program at First Baptist Church in Targu Mures. In the early 90’s I met Bruce Thomas for the first time, and worked with him as a volunteer for Reach Out Ministries in Christian discipleship camps.

In 1991 our family was blessed with our only son, Filip Daniel. In the same year I started my own business, a printing company, but last year, because of the financial crisis I had to close it. In December 2009 I was asked to be the Executive Director for Fundatia LOC. My goal as a director is that the vision of the foundation will be fulfilled in the lives of all our kids and especially that they will meet Jesus Christ as only way for their future.